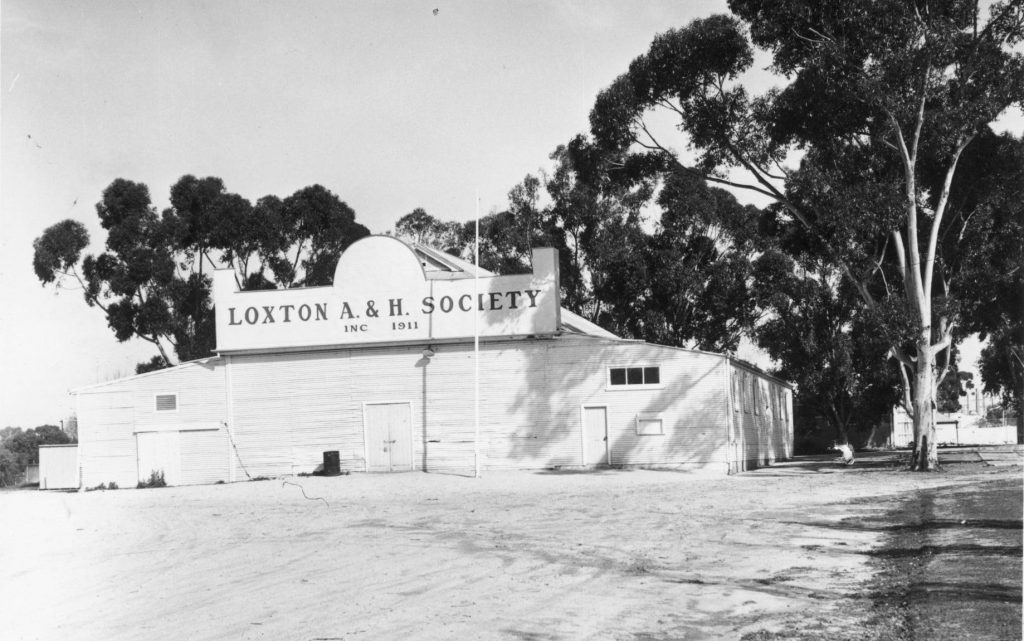 A meeting to form the Loxton Agricultural & Horticultural Society was held at the Loxton Hotel on April 11, 1911. The first president was Mr A McCourt and the Secretary was Mr F J Martin.

The first Show Hall was built by H A Lutz for £20 ($40.00) plus timber and iron. A 60’ x 40’ hall was constructed on land (at the current site on Bookpurnong Road) given by Mr J A Thiele and it was opened at the first Show on Wednesday 27th September 1911. The five foot high fence was erected of wire netting with plain and barbed wire, all in time for the first Show. The men were busy grubbing bushes, harrowing and rolling the ground.

Trees were planted on the grounds in 1912. Mr Hamdorf supplied the water for the trees and for the Show days and in return he was permitted to graze his cows throughout the year. The Show Society found this arrangement was the best way to get the grounds ready for the Show each year.

There have only been 8 years when the Show has not been held. These were during the two World Wars (when a lot of men were at war) and in the Depression.

The Loxton A&H Society owned the land surrounding the Show Hall, including the football oval. They allowed other community groups to utilise facilities. A range of sports, including basketball and table tennis were played in the hall and football and cricket were played on the oval.

In 1955, the Loxton Football Club wanted club rooms to be build and for the oval surrounds to be brought up to the same standard as the oval. The upkeep of the oval alone was costing the Society too much money, so they agreed to sell the land to the Loxton Council in 1958 for £1,750 ($3,500). The Show Society had to pay rent of £100 ($200) allowing them to use the grounds and facilities, 5 days before and 5 days after the Show. The Show Society was not happy about having to hire the grounds and it took until 1962 before they agreed to do so.

In 1974, after long discussions with Council and the Basketball Association, it was reported that a new hall would be built. The Council had to supply 2 marquees for the show that year as the hall was not completed on time. Some of the timber and iron from the old Hall was used to build sheep and cattle sheds.

The new Hall was officially opened on November 22, 1975 by Mr Tom Casey MP, the Minister of Tourism, Recreation and Sport. The Hall cost a staggering $238,000.

The Hall was initially called the Loxton Recreation and Sports Centre. The Show Society was very disappointed that they were not recognised in the name of the hall and after a public meeting on this issue held on 12th May 1980, the Council decided changed the name to the “Loxton Show and Recreation Hall”.

In 1990, the Show Society decided to showcase the hall exhibits over two days. The outdoor exhibits followed Section by Section and currently, Section D (sheep) is the only section held on one day.

The Sections of the Show have seen many changes over the years. In the past, the Show included Sections for Pigs, Cats, Goats and Pets, but all of these have been discontinued for various reasons. Other sections, like Cattle and also Hobbies, have evolved and now include a wider range of exhibits. In recent years, new Sections for Vintage Cars and Machinery, Whip Cracking, Yard Dogs, Young Farmers Challenge, Recycled Bike Art and Photography have been included in our wide and varied program.

The Loxton Show has evolved over the years but it continues to be one of Loxton’s major events.